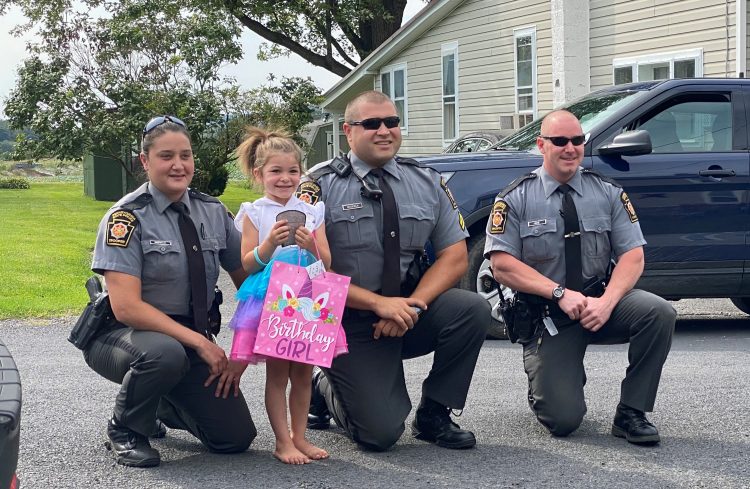 A themed party, with lots of friends and cake, would make most any 5-year-old’s birthday a memorable occasion.

Maci Grace Werdt had a memorable fifth birthday of her own recently, courtesy of the Pennsylvania State Police-Schuykill Haven barracks and three of its troopers.

A visit from the police was at the top of Maci’s birthday wish list. Her grandmother conveyed the request to PSP-Schuylkill Haven and was told that, following the afternoon shift change and roll call, a trooper would pay a visit to her Orwin home, as long as there were no emergency calls.

Maci always has loved police officers and wants to be one when she grows up, according to her mother, Heather Bordner. (Maci’s father is Cody Werdt and her sister is Nova Werdt.) ‘‘Since she was two, (Maci) has always waved and pointed out the police and police cars,’’ Bordner said. ‘‘Anytime we were close to some, she has always wanted to go say ‘Hi’ or wave to them.

We see them at Dunkin and she wants to buy their drink.’’ Maci got more than what she imagined, though, when not one, but three troopers pulled up to her house in a marked cruiser, lights flashing. ‘‘She was speechless, with the biggest smile on the face – overjoyed, SEE OVERJOYED • PAGE A8