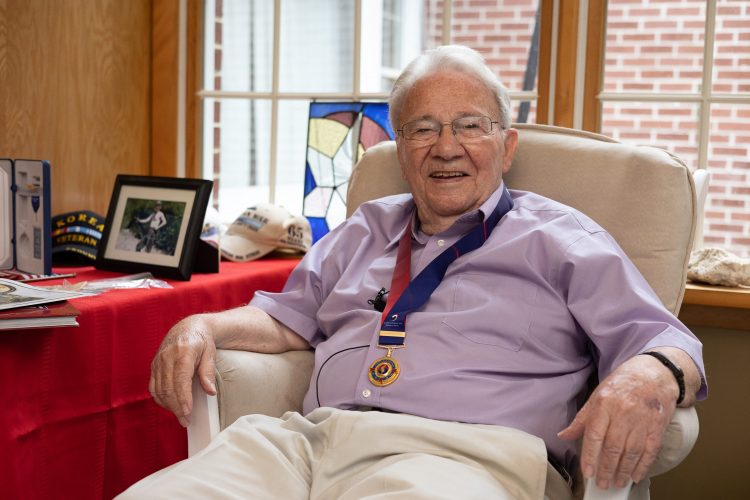 In the early 1950s, Marvin R. Troutman was a young man from a small town who, like other young men, found themselves in unfamiliar surroundings among unfamiliar people. Even so, Troutman and those with him rose to the occasion and defended that place, and its citizens, against an attack from outside adversaries. That place, South Korea, never forgot the service and sacrifices given by Troutman and his colleagues during the war of 1950-53. Last week, he received a special reminder of that nation’s appreciation for all he and others had done. The area native was formally presented with the Ambassador for Peace medal, awarded by the Korean Consul General to the country’s military allies during its battle with North Korea from June 1950 to July 1953. (U.S. troops who participated in United Nations peacekeeping efforts until the end of 1955 also were eligible for recognition) The medal was formally bestowed by the office of U.S. Sen. Pat Toomey. The presentation took place in Troutman’s Millersburg-area home July 8, with his three children — Trudy, Gina and Van — looking on. Col. Robert DeSousa (Ret.), Toomey’s state director, made the presentation, along with Dauphin County state Sen. John DiSanto. Surviving the Horror North Korean forces crossed a previously demarcated border with its southern neighbor and initiated attacks that led to a formal state of war June 27, 1950. At the United Nations’ request, the United States and 39 other member countries responded with assistance in the form of troops, supplies/ equipment or medical aid. (North Korea, meanwhile, was aided by both the USSR and mainland China.) Hostilities ended with an armistice signed July 25, 1953. The United States supplied about 90 percent of the military help. More than 1.7 million Americans served, Troutman among them in 1952-53 as part of the U.S. Army. Trudy Withers, his oldest daughter, said she was both proud and happy for her father to be recognized with the medal.

SEE THANKS • PAGE A2