Trees have a personal touch 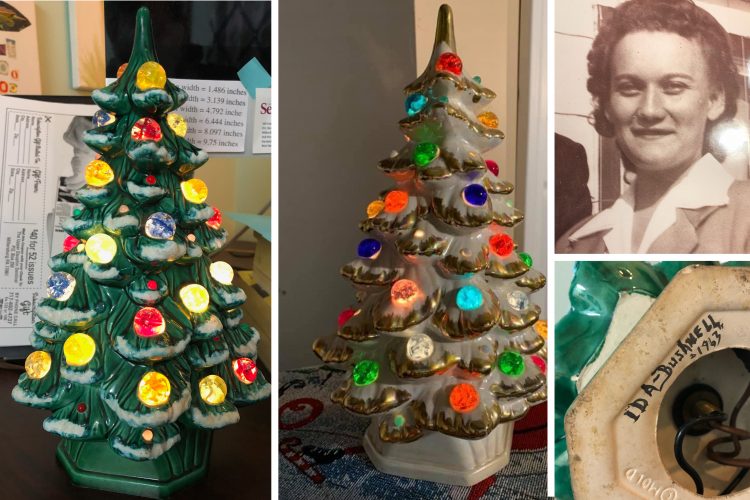 It’s the time of year when Sentinel-area residents bring out their Christmas displays, many of which are hand-crafted and have been handed down through generations.

One such item prompted a discussion on Facebook that led to some unique revelations.

Mandi Trawitz, the Sentinel’s advertising account executive/ graphic designer, had posted on Facebook how she put her ‘‘Ida Tree’’ out for display at her work space.

‘‘This unique tree was made by Ida Bushnell in 1963,’’ she stated. ‘‘I purchased it at our local Goodwill more than five years ago and having never meet Ida, I like to think she would appreciate that her unique tree that she put time into making is still spreading Christmas cheer.’’

Green in color and featuring marbles resembling Christmas ornaments, the tree includes Bushnell’s signature at the bottom of its base. ‘‘I have seen many of these trees around, but never one made with marbles. Have you?’’ Trawitz asked on her post.

That question prompted a response from Trawitz’s Facebook friends Charity and Aaron Maurer. ‘‘Oh my goodness! That is Aaron’s great aunt (later corrected to ‘‘grandmother-in-law’’),’’ Charity stated. She then sent Trawitz a photo of her tree. They almost match, but Maurer’s was white and gold, and Trawitz’ is green and white.

That exchange of information was followed up with another post, this one from Alan Maurer, Aaron’s father. ‘‘Ida was my mother-in-law,’’ he stated. ‘‘She would sit at a table and make all kinds of ceramics; I still have items that she made. ‘‘She had a kiln in the basement,’’ he added. ‘‘To make the cracked marbles, she would put them in the oven and then take them out and put them into cold water. She was very good at it and made many beautiful things.’’

In response, Trawitz wrote, “Thank you so much for sharing this information about Ida with me. Ida sounds like my kind of lady, making things, as I love to do too. ‘‘I am so honored to love her tree – a little tree, spreading cheer for many years.’’