“They’re right where they belong”

PART 2: FOR HAILEY, SAVANNAH & JT, A JOURNEY BACK TO WHOLENESS – AND LIFE TODAY 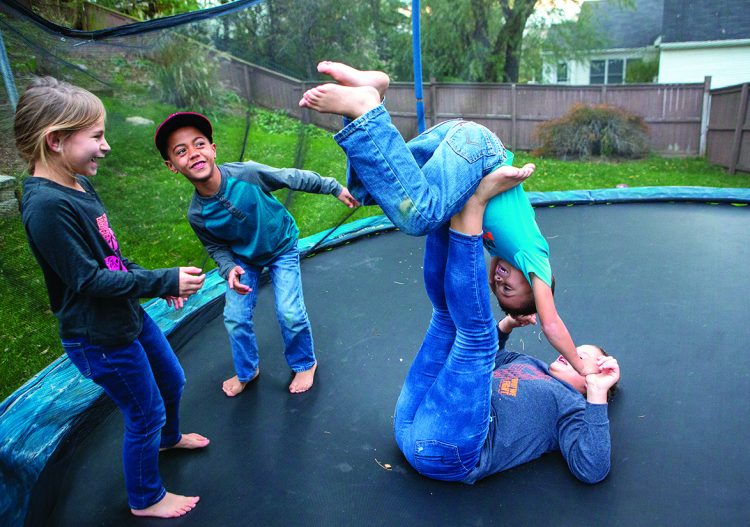 (Editor’s Note: The Jan. 7 Sentinel included the first part of a story on the three children rescued from a Halifax Twp. home in late 2016 after showing signs of extreme abuse and neglect. The story continues this week with an emphasis on their lives today, and their journey back to physical and emotional wholeness.)

For three young children, emotionally it was still close by.

The house in fact resembled their former residence enough for them to begin screaming and crying when they passed it while riding in a vehicle with their new family.

Jackson (aka JT), Savannah and Hailey were convinced they were being taken back there – back to where they’d been starved, deprived of sleep, beaten and forced to live in conditions under which a pet owner could be arrested for animal cruelty.

In the three ensuing years since they lived out a nightmare in slow-motion, JT, now 9; Savannah, 8; and Hailey, 7, have been in a world that doesn’t just exist in a dream.

Under the care of their adoptive parents, Rubin and April Doster, they have thrived physically and emotionally. They are doing well in school, stay busy with sports and other activities and have two big sisters, and a little brother, who think the world of them.

There have been – and will continue to be challenges – their mother acknowledges. But comparing today with the past … well, there just isn’t any comparison.

Not only are the three so much better emotionally, but they have made ‘‘amazing’’ progress in school and in just living life the way children should, she noted.

As related in last week’s story, Hailey begged Rubin and April to go outside in freezing temperatures because the experience of being outdoors was so foreign to her.

That wasn’t the only adjustment she, Savannah and JT underwent in their new home. ‘‘Trust was a big issue,’’ April noted. ‘‘At first, I couldn’t leave them with anyone outside the immediate family. When we would go out, they would shut down; they wouldn’t make eye contact, they were very scared of other people.’’

Once JT and Savannah were enrolled in school, the district had to hire aides to help them adjust to being away from their parents and in a setting with other children they didn’t know. ‘

‘They were so frightened, they thought we were leaving them there and never coming back,’’ their mother said.

Schooling for the two had been non-existent when they lived in Halifax Twp., and it affected how they used words and formed sentences. ‘‘Savannah once looked up at the sun and said ‘That’s blocky,’” April recalled.

‘‘Our teachers have told us they’ve really been improving.’’

Hailey’s initial major adjustment was different. She had so little experience using her legs that, when on a sidewalk and approaching a curb, she would bend over and grab hold of it. Even a trip less than two blocks away – to where her siblings met their school bus – was difficult.

More recently, Hailey has taken up ballet and, like her siblings, also is involved in youth sports.

‘You see the world through their eyes’

Being outdoors and knowing how it feels to play outside, weren’t the only life experiences of which JT, Savannah and Hailey had been deprived.

‘‘They are still behind in life experiences, but they have learned so much in the past three years,’’ April noted.

‘‘It really makes you, as an adult, appreciate things a lot more. You see the world through their eyes; they have an even greater appreciation for things we might take for granted.’’

April’s mother, Valerie Tanner of Danville, still recalls the children’s first Christmas at home, and how Savannah ‘‘acted like she was in a foreign world and people were talking a different language.

‘‘She had no idea how to react to anything; she was totally out of her element. After one visit early on, Tanner returned home from Palmyra without turning on the radio, despondent at how much the children cried and seemed emotionally troubled.

‘‘Now they are all so excited about their lives, and all the activities they get to do,’’ she said. ‘‘They are so grateful for everything that’s been done for them.’’

‘Thank you for letting us sleep’

Once all three were secure in the Doster home, April was granted leave from her job (an emergency room nurse at Penn State Health Milton S. Hershey Medical Center) to attend to their most pressing physical and emotional needs.

They were behind in their vaccinations as well as dental care. (As noted last week, JT showed evidence of losing