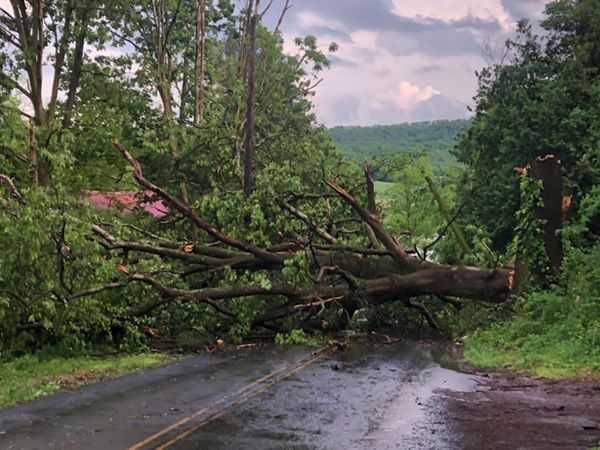 Straight-line winds, accompanied by hail, caused damage in northern Dauphin County late in the afternoon of June 4, according to a report released by the National Weather Service-State College. The report was ‘‘preliminary and subject to change,’’ the NWS said June 5. No update had been issued as of press time June 8. NWS investigators said the incident occurred between 4:30 and 5:15 p.m. Wind speeds were clocked at between 70 and 90 mph. The width of the storm’s path topped out at 200 yards, and its length was estimated at 12 miles. ‘‘Several pockets of damage were observed throughout eastern Perry County and into Halifax,’’ the report stated. ‘‘Sporadic straight-line damage (occurred) along a line extending from north of Newport … to Halifax. “In Halifax, there was a concentrated swath of downed hay and snapped trees with a fall direction perpendicular to storm motion and all in approximately the same direction. ‘‘Additionally, a barn and chicken coop sustained notable damage from straight-line-wind gusts estimated to be upward of 90 miles per hour. ‘‘The hay damage was sporadic and perhaps can be attributed to a mix of damaging winds and hail from the severe thunderstorm,’’ the NWS reported. Additional downed trees in the Millersburg area were reported to the Sentinel. Bob Stout from the Dauphin County Emergency Management Agency assisted NWS staff with surveying damage in the Halifax area.

Rhonda Laudenslager gave the newspaper permission to publish this photograph of storm damage along Lebo Rd. near Enterline June 4.