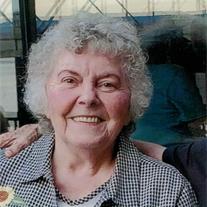 MILLERSBURG • Shirley L. Zimmerman, 82, of Millersburg, passed away July 20, 2021, at the UPMC Harrisburg. She was born Jan. 30, 1939, in Jordan Twp., a daughter of the late Nora and Charles Hollenbach. Shirley retired as a nurses’ aide from the former Tressler Lutheran Nursing Home. She was a member of the Woodmen of the World. Shirley is survived by her two sons, Steve Zimmerman and Terry (Cindy) Zimmerman; two daughters, Deb (Steve) Shomper and Sonja Shomper; sister, Betty Lebo; four grandchildren and four great-grandchildren. She was preceded in death by her husband, Harold S. Zimmerman; three brothers, Charles Jr., Marlin and Delmar Hollenbach, and a sister, Martha Rebuck. A funeral service was held Tuesday, July 27, 2021, at the James A. Reed Funeral Home, Pillow. Interment was in the Salem Lutheran Church Cemetery, Killinger. In lieu of flowers, memorial contributions can be made to Hospice of Central PA. James A. Reed Funeral Home, Pillow, is in charge of the arrangements. To sign the online guest book or to post a picture of Shirley, visit reedfh.com Paid by funeral home