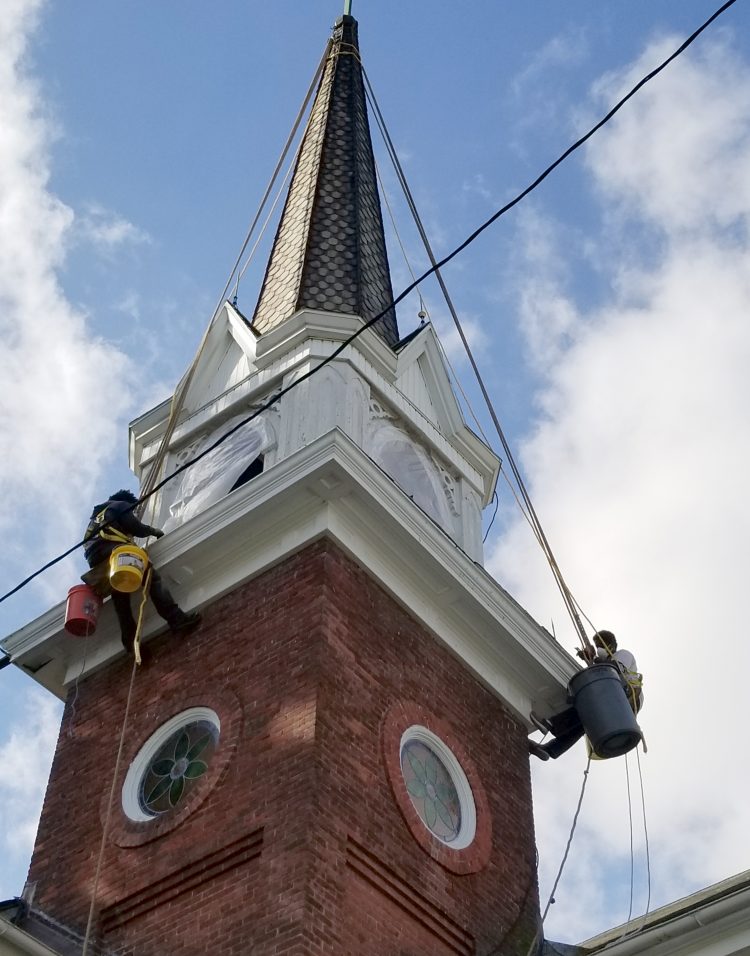 The steeple of what once was Zion Lutheran Church always stood tall, almost sentry-like, over Pillow.

This week, it’s standing even taller.

That’s the result of a state grant, community support and the craftsmanship of an Illinois company.

Work was completed late last month on a multi-week project at the historic Zion Church, which has served as headquarters and museum for the Pillow Historical Society for more than a decade.

Originally built in 1885, the former church has faced a serious structural flaw for years.

Simply put, the original belfry’s wood foundations were rotting away due to moisture from repeated rainfall.

In a bad enough storm, that part of the building – both the spire and belfry – could have collapsed and toppled into the street below.

That would have been tragic for a building described by historical society President Sandra Lamenza as ‘‘symbolic of our town.’’

The former church featured prominently on the official logo for the community’s bicentennial observance this year.

‘‘To lose it would have been a real shame,’’ Lamenza said.

After local contractors passed on the project, saying the necessary repairs were too specialized, Lamenza found a Rockford, Ill.-based company whose specialty is, in fact, restoring churches (and former churches) to structural good health.

Inspired Heights Inc. team members worked through September and October stabilizing the steeple and replacing whatever wood and brick pieces were necessary to keep it that way, going forward.

Crew members were interrupted once for an emergency job in Minnesota. A microburst had destroyed a steeple on a Minneapolis house of worship.

Pillow’s building easily could have suffered the same fate, according to James Santos, who led the crew that worked locally.

“The main issue was that the support beams beneath the belfry were literally rotting out,’’ he explained. “There was no reason other than God for why that bell was staying up there.’’

‘’When (the historical society) contacted us, it was the best thing they could have ever done, as opposed to losing (the belfry and spire),’’ Santos added.

Major funding for the work was split between:

• A $30,000 Keystone Historic Preservation Grant obtained through the state Historic and Museum Commission.

• A matching amount derived from monies earned through private contributions and  fundraisers (i.e. Dog Days of Pillow, Christmas gift wrapping, face-painting and others).

Funding for necessary additional work, mainly the replacement of brickwork that also had been loosened or deteriorated by water damage, was procured through donations and the profits from 2018 Dog Days of Pillow.

Lamenza was ‘‘very pleased’’ that Inspired Heights traveled east to help preserve such an iconic part of Pillow’s heritage.

‘‘We do it the way it was done 100 years ago,’’ Santos noted. ‘’Steeplejacks are a dying trade; there are very few of them left in the United States and we are fortunate to be one of them. We travel everywhere.’’

‘‘James imagined all these additional things we could do and should do (to the structure), but right now we are focusing on making it stable,’’ Lamenza said.

‘We do it all for God’s glory’

While ‘’restoration’’ applies to the type of work Inspired Heights does on church buildings around the United States, it also could apply to another aspect.

The company also focuses on restoring the lives of men who’ve been incarcerated.

The company has a mentorship/disciple-ship program that teaches ex-offenders marketable job skills in construction and offers them guidance in Christian living.

Prayer, worship, Bible study and accountability to each other are all part of the program, according to the company website, inspired heights.com.

‘’We love what we do, and we do it for the glory of God,’’ said Santos. ‘‘We mentor men who have maybe had drug and alcohol or other issues; we teach them trades, and we show them a better way.’’

Pictured above: Steeplejacks worked earlier this fall on stabilizing the steeple of the former Zion Lutheran Church in Pillow.