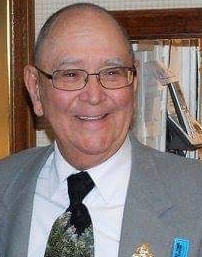 After becoming aware that he had pancreatic cancer November 2018, Melvin E. Nace, 79, fought a courageous fight and finally lost his battle Tuesday, March 16, 2021. He graduated from Halifax High School (first class to have graduation ceremony in the new school), received resource management training from the U.S. Air Force, a bachelor of administration from Wilmington University of Wilmington, Del., and a master’s of business management from Central Michigan in Michigan. Melvin retired, after 26 years, from the U.S. Air Force, having served during the Vietnam War era and was stationed at numerous air bases throughout the country and abroad. He also was retired from the State of Delaware, where he worked as an accountant for 16 years. He was a member of Zion Stone United Methodist Church, Halifax, the Dover Stamp Club and a member of the Capitol City Lions Club in Delaware, where he was a Melvin Jones Fellow. He was the son of the late Agnes (Maneval) and Merrill Nace of Halifax.  Surviving him are a brother, Lester (Betty) Nace of Duncannon; a sister, Anna Nace of Halifax; nephew, Kirk (Carlene) Nace of Wake Forest, N.C.; his children, Thomas of Brazil, Shelby of New York, Chloe of Duncannon, Salene and Saleece of Wake Forest; niece, Kristi (Mike) Kuren, her son, Cooper of Duncannon; nephew, Kraig (Tonya) Nace of Duncannon, his children Katie, Konnor, Kalvin and one on the way; and niece, Keri Nace of Duncannon. Funeral services were held March 23, 2021, in Zion Stone United Methodist Church, Halifax. Burial was in Zion Stone United Methodist Church Cemetery. Arrangements are under the care of the Ronald C.L. Smith Funeral Home, 325 N. High St., Duncannon PA 17020. Memorial contributions in Melvin’s honor may be made to Capitol City Lions Club Melvin Nace Award, c/o Warren Fariress, 902 Jonathan Dr., Dover DE 19901. Paid by funeral home