Knauber enjoyed hiking until he died at 98 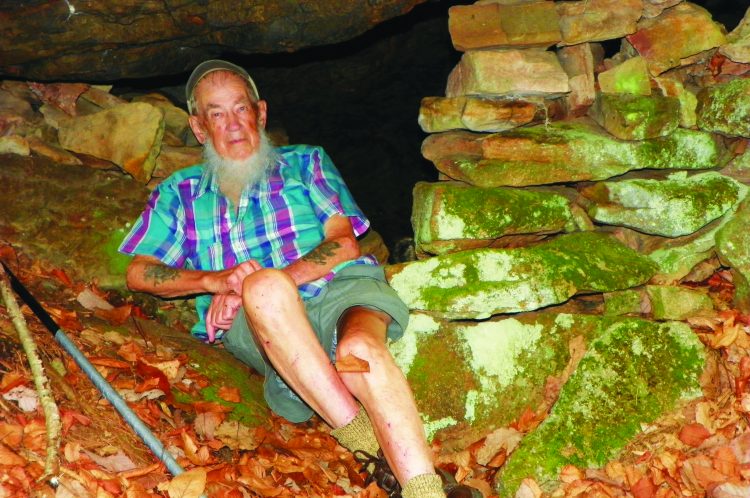 Photos and story by Jim Leaman.

Throughout life we meet a lot of people. Some people we’ve met really stand out, and we remember and miss them. Let me share with you the most unforgettable character I’ve ever met.

Henry L. Knauber passed from this life July 8 at the age of 98.  He was known to many of the readers of The Upper Dauphin Sentinel as an adventurer, hiker and friend. He was featured in many of our stories as a historian and an outdoorsman, with a unique knowledge of the forests and streams of northern Dauphin and western Schuylkill counties.

In his later years, he knew every square inch of land in northern Dauphin County, as he continued hiking in the woods daily at his advanced age of 98.

Knauber was a fixture in the town of Wiconisco and known far and wide as his little red Ford car could be spotted parked along a trail anywhere around Clark’s Valley, Weiser State Forest, Greenland or St. Anthony’s Wilderness in Stoney Creek Valley.

His car had the personalized license plate of “A HIKER.”

Knauber was born May 18, 1920, in Reilly Twp., Schuylkill County, to the late Henry and Meda Miller Knauber.  He graduated from Reilly Twp. High School, Branchdale, in 1938.

He was a machinist apprentice and did some odd jobs until America entered World War II.

The 1st Infantry Division was known as “The Big Red One” and was distinguished in battle throughout its history.

Knauber saw action in Africa, Belgium, Holland and Luxembourg. Most notably, he participated in the D-Day invasion of Normandy.

On June 6, 1944, Knauber was the pilot of a six-wheel drive amphibious vehicle known as a Duck (technically DUKW). These were used to transport goods and troops from the sea to the beach.

Knauber was involved with the assault on Omaha Beach. As he was navigating, the Duck he piloted was coming near Omaha Beach.  The waters grew treacherous, and the vehicle began to take on water. Of the six Ducks in the group with Knauber’s, four of them sunk in the treacherous seas of the English Channel, including his.

Knauber escaped the sinking craft and was spotted in his life vest and picked up by another Duck. He was taken back where he boarded a Rhino (ferryboat) loaded with 30 vehicles and attempted another landing.

The enemy fire on the beach was still too rough, so they went back to the safety of the L.S.T. (Landing Ship, Tank) again and waited for morning. They were able to get onto Omaha Beach around 2 p.m. June 7, 1944.

Of course Knauber’s military service generated a lot of stories, and Bob Fromme Jr. of Millersburg has put together a collection of Knauber’s World War II exploits. It is an amazing account of first-person recollections from Knauber’s own daily diary.

Fromme was Knauber’s close friend and hiking buddy since around 2004 when they met while attending a presentation at the Lykens library.  While sitting next to Fromme, Knauber casually asked if he did any hiking. From there a friendship was born.

Fromme knew ‘‘Hen’’ well and spent many days hiking and exploring with him.

Fromme and “Hike-Along” Henry Knauber explored and discovering long-lost corners of the Pennsylvania woods. Fromme told me Knauber loved to deviate off of the normal trails, ‘‘bushwhacking’’ his way through the thick vegetation in his path.

During these hiking trips, they both discovered things that were lost to people who stayed on the well-worn trails.

One of the things  Knauber found was snakes. Fromme is not particularly fond of the legless reptiles, but Knauber found them to be a source of amusement. He liked to tease rattlesnakes using his hiking stick to poke and provoke them. He knew the limitations of these deadly creatures and stayed out of striking distance. He’d tease them until they retreated.

After one long day of hiking, Fromme and Knauber were on their way home, when ‘‘Hen’’ saw a six-foot blacksnake slithering across the road.  He walked right over to it and grabbed it by the tail, hoisting it up like it was a length of rope.

Fromme kept warning Knauber to let it go but “Hike-Along” wanted to tease both Fromme and the snake.   Fromme got a picture as Knauber continued his fearless ruse. Finally, Knauber walked to the side of the road and gently released the serpent that beat a hasty retreat into the dark, heavy brush.

Fromme and Knauber continued hiking together for many years. If Fromme called to go hiking, and Knauber was not home, his answering machine would say this:

“This is Mr. Knauber, the master of this domain. I am presently indisposed.  Please state the nature of your business. Make it brief. If you are not selling time shares, automobiles or cemetery lots, I will endeavor to return your call if the spirit so moves me. Thank you.”

Great friends to the end, Fromme had this to say about his friendship in the February 2009 edition of the Keystone Trails Association Newsletter:

“His legacy to me at the age of 62 was to inspire me to get off my early retirement chair, and enable me to reconnect with memories of those endless days of exploration of my youth, and appreciate the simple beauty of moss-covered ground, the smell of fresh fallen leaves, and the quietness around you. Thanks, Henry.”

I first met Knauber through Duane Good, editor of the Sentinel, in May 2007.  Good asked if I would follow up a lead to do a story about Knauber, who was known as an avid, active hiker, still going at the age of 87.

About six months later, in October, Knauber contacted me  by phone. He asked if I wanted to hike with him to see the burial site and murder scene of Daniel Hendricks, who was killed by William Williams on the mountain behind Wiconisco.  The complete story was published in the Sentinel’s Oct. 30, 2007, issue.

We hiked with Ed Bechtel of Wiconisco, Seth Cassell of Halifax and Leo Boyer of Kalmia (near Muir). We all hiked with Henry to the grave site of Hendricks, killed in 1857, off the Fire Tower Road northwest of Wiconisco.

About halfway up, Knauber wanted to take a little break. I was glad he did.

Knauber hiked like a mountain goat. He didn’t go for fancy hiking equipment. He liked to wear high- topped hiking boots (because of snakes), but sometimes he would wear shorts and lighter clothing in warmer weather. He always had his hiking stick.

Fancy trail food was not for him. He was happy with a Tastykake® or two and plenty of water or juice. Sometimes he carried a box of fruit punch, wrapped in a paper towel, and stuffed in his back pocket. His favorite meal was butter fried potatoes prepared in an iron skillet, with a can of Nally’s® chili.  His friend, Ida Davis, would send it to him from Utah.

I hiked with Knauber in 2010 and again in 2012, and together we worked on articles about the charcoal-making process, and tar-pitch pits. Knauber had an amazing ability to “read” the woods, and he could tell you exactly where the charcoal mounds were. Through his guidance, you could find old remnants of burned charcoal or see the tar-pitch collecting stones.

One of the things I found wonderful was Knauber’s willingness to share the knowledge of the trail with whomever was hiking with him. We would come across an old stand of oak trees, and he would tell me about how long ago the trees were timbered from the area. I was surprised to know that some trees were not nearly as old as I thought.  He just knew the woods, and could tell you so many things about it.

Knauber wasn’t limited to hiking just around here, although there is a branch off the Appalachian Trail near the Dehart Dam in Clark’s Valley named “Knauber’s Trail.”

He hiked the entirety of the Appalachian Trail in sections. In 1994 he went beyond the trail at Mt. Katahdin, Maine, to a high outcropping called “Razor’s Edge.” Most people who get to the end of the trail go no farther, but not “Hen.’’

He hiked to the bottom of the Grand Canyon and back, and he hiked through the Rocky Mountains in Colorado and Utah.

Just last year, he was visiting his friend in Utah and decided to take a little hike, by himself, into the mountains.  North of Salt Lake City he started up a steep ravine near Layton. Ida Davis was going to pick him up at the parking area when it got dark. He didn’t show up. As she worried, Knauber called her on the cell phone. The conversation went something like this:

“Hello, Ida. I was enjoying my hike and lost track of the time. While coming down the trail, it got so dark I couldn’t see it anymore, so I’m going to spend the night on the trail.”

“Are you going to be all right?” Ida asked. “You didn’t pack warm clothing for the cold air at night.”

“Don’t worry about me. You go on home and meet me in the parking lot when the sun comes up. Go on home, and I’ll see you in the morning.”

The next morning, Davis was waiting at the parking lot when finally, Knauber came  down the steep trail.  He walked up to the car and got in. Turnin to Ida, he said, “I’m just fine, but I would sure like to get a hot shower.”

The last time I hiked with Knauber, in 2014, he was 94 years old and could still maintain a quick pace in difficult terrain.

He wanted to show me an old Indian rock ledge shelter back in the Greenland area of Weiser State Forest.  The hike may have been a mile at most, but as we made our way back to the shelter, I noticed Knauber still held the same reverence for the woods and terrain.  His eyes sparkled as we jumped across the small creek toward the shelter.

Knauber always marked his trails with little round aluminum disks that he made at home. I watched his face as he attached the disk to the tree that marked where we turned to go uphill to the shelter. He had a serene look on his face … the look of conquest. When he was done, he closed his eyes for just a moment as if he was thanking God for this opportunity to be out in the woods another day.

He was able to hike for nearly four more years and hiked whenever he got the chance up to the age of 98.

Davis was with him at home in Wiconisco July 7 of this year.  Knauber fell asleep that evening, and his mind and body came to an agreement to not hike here anymore.  He passed this lifepeacefully for a place full of new challenges and adventures.

I will never forget “Hike-Along” Henry Knauber, and neither will anyone who has ever met him or hiked with him.  I would like to try hiking on “Knauber Trail” in Clark’s Valley, but I understand it can be a bit of a challenge.

Pictured above: Henry Knauber, at age 94, sits in a shelter used by Native Americans that he found on one of his hikes.