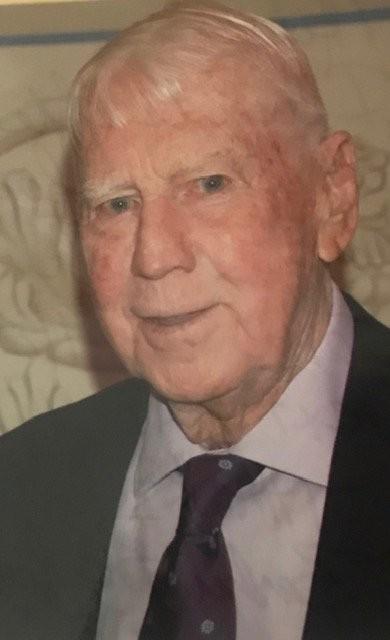 WILLIAMSTOWN • John Joseph Challenger, longtime resident of Williamstown, and most recently of Willow Valley Communities in Lancaster, passed away peacefully March 27, 2020, at the age of 95. Known by many as Jack, he was a graduate of Williamstown Catholic High School and a member of Sacred Heart of Jesus Catholic Church in Williamstown and also a member of the Williamstown American Legion. After graduation he served in the U.S. Army, serving in France during World War II. He remained a member of the National Guard until his retirement. Jack epitomized the very best of the “Greatest Generation.” When he returned from the war, he married the love of his life, Molly Rodichok, his wife of 68 years, and laid the bricks himself for the home where the couple raised their two daughters. Jack believed in the power of education and was committed to seeing his daughters become college graduates, which they did. Jack was known for his wisdom and was the steady backbone of his family. He was also loving, caring and extremely charming. Each fall he celebrated the beginning of the college and professional football season and passed his love of football on to his four beloved grandsons. Jack is survived by his wife, Molly; his two daughters, Susan Hendrickson and Barbara Bechara; four grandsons Matthew Hendrickson, Andrew Hendrickson, Michael Bechara and John Bechara; one great- granddaughter, Hazel Hendrickson; and two sisters Catherine Ahrens and Helen O’Boyle. A Memorial Mass of Christian Burial for family and friends will be celebrated at Sacred Heart of Jesus Catholic Church. A date and time has not yet been set and will appear on the website. Donations in Jack’s name can be made to Sacred Heart of Jesus Catholic Church, c/o parish office, 732 Main St., Lykens, PA 17048 or the Williamstown American Legion, 123 W. Market St., Williamstown, PA 17098. The Dimon Funeral Home & Cremation Services, Inc., has been entrusted with the arrangements. To sign the guest book, visit dimonfuneralhome.com
This is a paid obituary