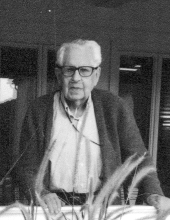 MILLERSBURG • Irvin Clay Shiffer, 95, passed away Feb. 20, 2019, at the Polk Personal Care Residence. He was born May 9, 1923, in Upper Paxton Twp., a son of the late Irvin Clay Shiffer Sr. and Mildred (Forney) Shiffer. He was raised by his grandparents, E.C. and Fietta Shiffer. He is survived by his daughter, Judy Shiffer Harris; and grandchildren: Jill Harris Blasser (Tab), Bradley D. Harris, Mark W. Harris (Stephanie) and Kara Shiffer Hebe (Mike); his great-grandchildren: Ali Sheets, Kayla Harris Eaton, William Sheets, Madison Blasser, Sara Harris, Emma Harris and Chase Blasser. He is also survived by a sister, Edna Mae Bonawitz; and his daughter-in-law, Marilyn Shiffer. He was preceded in death by his loving wife of 58 years, Esther Long Shiffer; his son, Robert C. Shiffer; son-in-law, Bill Harris; brother, Cloyd Shiffer; and sisters, Gladys Shiffer Rothermel and Betty Shiffer Matter. He attended Millersburg High School. He worked at the Lykens Valley Roller Mill (“Shiffer’s Mill”) and also had a coal delivery service. He was an active member of Zion Lutheran Church, where he served on the church council, was a past president of the Zion-Killinger joint council, and was a former president and secretary of the Men of the Church organization. He also was active at the Lykens Valley Camp Meeting Association where he served on the board of managers and various committees. His family was the most important thing in his life. He was an extraordinary example of how to live. A memorial will be held at the family’s convenience. In lieu of flowers, memorial donations may be made to Zion Lutheran Church, 129 Rife Rd., Millersburg, PA 17061 Minnich Funeral/ Hoover-Boyer Funeral Homes, Ltd., Millersburg, handled the arrangements. Please sign the online register book at minnichfuneral.com
This is a paid obituary