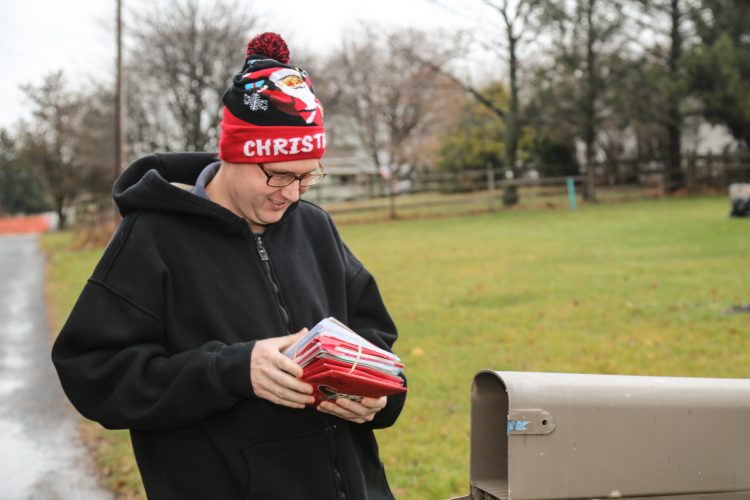 “It’s MY mail. All of them. Look at that. It says ‘Brandon,’ ” said Brandon Bohner, Dec. 7, when he retrieved the U.S. Mail from the mailbox at his aunt’s house in Berrysburg and found several cards addressed to him. Brandon, a special needs adult who rarely receives mail, has been getting lots of mail and even gifts since his aunt, Beverly Fulkroad, posted a Facebook request Dec. 5. Fulkroad asked friends and family to mail Christmas cards or birthday cards to Brandon. Fulkroad has been recording Brandon’s reactions every day and posting the videos to Facebook, and viewers have been sharing them with their friends. When he performed his usual routine of getting the mail Dec. 9, Brandon breathlessly said, “Oh my goodness! Look at this! More letters for me.” Fulkroad said he received 41 cards that day and looked at her and said “I think I’m gonna pass out.” Cards for Brandon continued to arrive, and each day his excitement continued. When he opened a box Dec. 14 from ‘Santa’s Helper’ that contained a knit

Christmas hat with small lights, he said “I’m gonna wear it all day” and he did. Fulkroad said, “I wish you could see how excited he gets. Every child gets excited when they get something in a card. Brandon gets that same joy when he just opens up the card.” The Motorcycle Santas group stopped at Fulkroad’s house Dec. 15 to deliver cards, a basketball and a football to Brandon. He heard the rumble of the motorcycles as they approached the house and said the experience was “really awesome.” Five school classes have mailed cards to him, as well as local high school sports teams and employees of Premier at Susquehanna near Millersburg. He has received approximately 1,200 cards including ones from people in other states and as far away as Alaska. He even enjoyed two fire truck rides. Gratz Fire Co. treated him to a ride in the firetruck Dec. 19. Then he rode with Santa and Mrs. Claus on the Berrysburg Fire Co. firetruck Dec. 22 and threw popcorn balls to onlookers. Many people have watched Fulkroad’s daily Facebook videos and have posted comments, including: “This video has everyone crying tears of joy just seeing his emotions” and “The pure joy on his face. Priceless!” Other people have posted that they were having personal problems but felt lighter when they saw the joy and astonishment that Brandon displayed from receiving the simple gift of a card.

Brandon is 35 and will celebrate his 36th birthday Dec. 26. Fulkroad took over his care the summer of 2012 and soon became his legal guardian. He is estranged from his immediate family. His father, who SEE INFECTIOUS JOY • PAGE A8