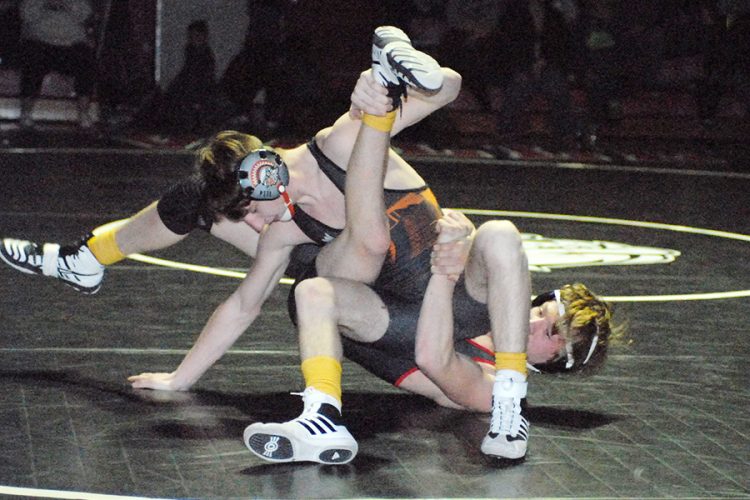 Upper Dauphin Area won its second league title in as many weeks, this time claiming the Schuylkill League Division 2 title after a thumping of Tri-Valley in Hegins Jan. 23.

It was the Trojans’ final dual meet before the District 3-AA team championships kick off this week.

The Trojans scored 44 points before the Bulldogs got their first win Jan. 23 in Hegins.

The victory ensured a third consecutive Schuylkill League, Division 2 title for UD, which improved its season record to 13-2. Both of the Trojans’ team losses occurred at the Virginia Duals tournament earlier this month.

Chase Witmer (285) struck first for UDA, earning a hard-fought 6-0 decision over Stone Clouser to open the match. Matthew Schwenk collected a forfeit at 106, before Maxx Trexler topped Mason Boltz in an 8-2 decision to put UDA up 12-0 after three bouts.

Ethan Paul (120) kept the Trojan train rolling with a 13-1 major decision over Austin Miller. Bronson Garber (126) and Zach Rupp (132) expanded the UD lead with falls before teammate Kade Matter (138) notched a 10-2 major decision over Dawson Schwalm, whom he had beaten by an 8-3 margin in the Schuylkill League tournament the prior weekend.

Tyler Wright (145) and Dillon Johns (152) continued the Trojans’ bonus-point rally with falls before Aaron Heffron finally scored a victory for the Dawgs, as he pinned UD’s Darien Wiest in the 160-pound bout.

Wiest and Heffron were tied 1-1 before the Bulldog caught Wiest with his guard down and earned a fall midway through the final period.