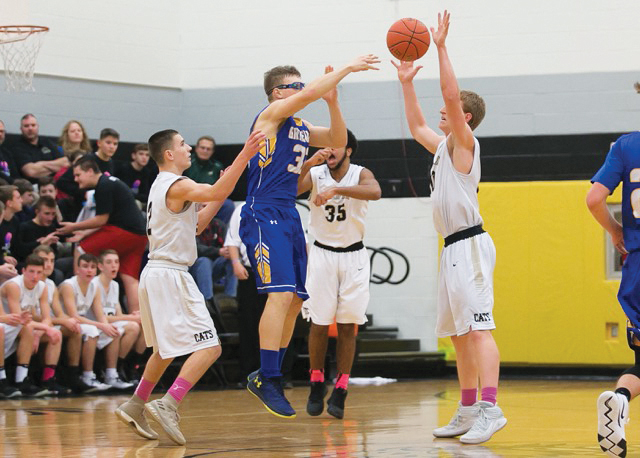 One of Head Coach Kent Houser’s 1,000 point scorers, Sagle was a major contributing factor for the Wildcats deep run into the state playoffs.

It’s now 2019, and Houser is still running the Greenwood ship. When the Wildcats traveled to Halifax Jan. 7, however, it became the classic tale of the student surpassing his teacher, as the local Wildcats bested the Tri-Valley League West Division leaders 41-33.

The crucial win did not come easy, though, for one of the Tri-Valley League’s top offenses.

It was a defensive battle from the get-go as Sagle’s team used traps and a high-pace attack to slow down Houser’s half-court offense.

Nathan Blasick and Dylan Wells led the way on defense, allowing Greenwood to score just eight points in the opening quarter. Blasick and Clayton Paul helped to push Halifax out to an early 13-8 lead.

The second frame played out similarly, as Sagle’s team kept its foot on the accelerator. Wells and London Johnson created a turnover, which led to a Blasick bucket.

Though a close game on the scoreboard, it was clear Halifax was the more physical team, winning loose balls and hustling on both ends of the floor.

Due to exceptional movement, the Halifax defense held the visiting Wildcats to just eight more points in the second quarter.

Blasick helped to keep the Cats afloat, but they too struggled to put together a series of shots. The Greenwood defense, though down on the scoreboard,
Read More On PAGE B9 • 1.15.19 Issue