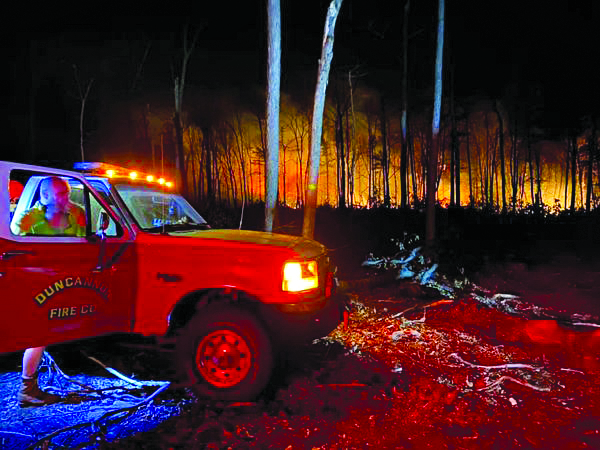 JACKSON TWP. • The efforts of firefighters from the Sentinel area and beyond helped to prevent an overnight blaze on Berry Mountain from damaging nearby homes or causing any injuries. An investigation into the cause was ongoing as of the deadline for this issue. The incident was first reported at about 9 p.m. April 8 as a brush fire on private lands off Deitrich Road. The fire began on a steep slope and rapidly spread upslope. It also crossed a dirt road mid slope, which firefighters were using to gain access to the mountaintop. Fighting the blaze required personnel and equipment from departments across Dauphin, Northumberland, Schuylkill, Perry and Lebanon counties, as well as personnel with the state Department of Conservation and Natural Resources. ‘‘Thanks to the cooperation and cohesion between the multiple fire companies from multiple counties and the DCNR wardens and crews, the fire was held to 18 acres,’’ according to Dave Warfel of the state Bureau of Forestry, DCNR. “Due to the weather and dry fuels, the potential was definitely there for a much larger fire.’’