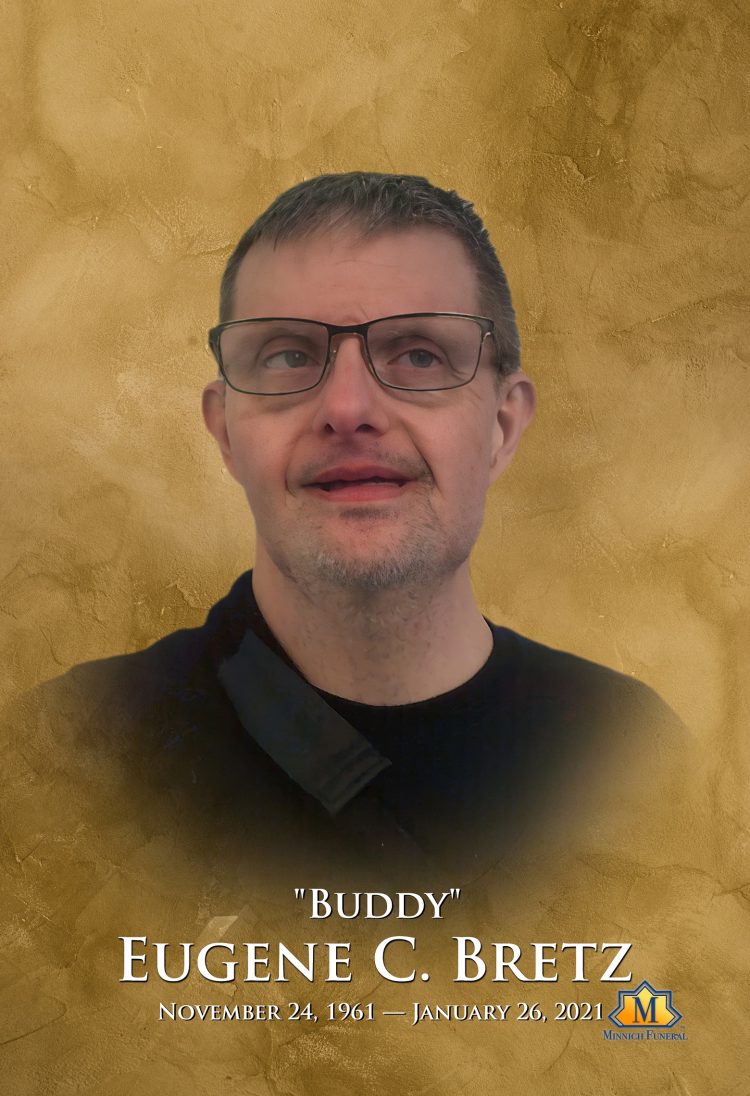 LYKENS • Eugene C. “Buddy” Bretz, 59, of Harrisburg, and formerly of Lykens, died Jan. 26, 2021, at his residence. He was born Nov. 24, 1961, the son of the late Eugene L. and Virginia (Carl) Bretz. He was predeceased by his parents, the Bretz’s, and his adopted father, Jeff. Buddy lived with adoptive parents, Jeff and Marylue Cosey-Jones, for almost 20 years in Elizabethville. Buddy retired from Goodwill Industries, working in both Harrisburg and Elizabethville stores. Upon retirement, he was a member of the Portraits of Life Adult Day Program in Lykens, and then Community Options Adult Day Program in Harrisburg. While living with his adopted family in Elizabethville (the Cosey-Jones), he attended the Emmanuel Wesleyan Church in Gratz. He enjoyed all kinds of music, especially the oldies from the ’50s, ’60s and ’70s. He enjoyed singing and dancing and watching Lawrence Welk. He loved Elvis and his music and would often perform for whomever was able to listen. Buddy was a Penn State fan and was able to go to many of their home games with his family who had season passes. He loved to watch football and could name all the NFL/AFL teams by their logos. His favorite teams to watch, though, were the Eagles and the Cowboys. Buddy enjoyed arts and crafts and learning new things. Buddy was a traveler. He enjoyed camping/RVing at the Lykens Valley Roamers, spending many weekends there and participating in all the activities they had to offer. He was able to travel around the country, going to Florida, South Carolina, Louisiana, and most recently to Kansas. He visited Graceland and the Grande Ole Opry in the Ozarks. Every year, he and two of his friends spent a week in Atlantic City traveling with The Guided Tour, Inc. He also looked forward to going to summer camps at Eagle Springs, Camp Sertoma and Camp Hope. Most importantly, Buddy knew how to love and enjoy people! He was constantly smiling and always greeted everyone warmly. Buddy had a wealth of knowledge about all kinds of topics and was able to converse with anyone on any topic. When others were hurting, he was compassionate and supportive. He could brighten my day just by reaching out and offering a hug! His friends will truly miss his friendship, his hugs, our singing and dancing and his zest for life! A service was held Feb. 4 at Minnich Family Funeral Homes Inc., Williamstown, followed by a graveside service at Maple Grove Cemetery, Elizabethville. The family requests that memorial donations may be made to Merakey, 265 S. Houcks Rd., Harrisburg PA 17109. Minnich Family Funeral Homes Inc., Williamstown (the former John R. Shultz Funeral Home, Lykens) is handling the arrangements. To sign the online guest book, go to minnichfuneral.com Paid by funeral home