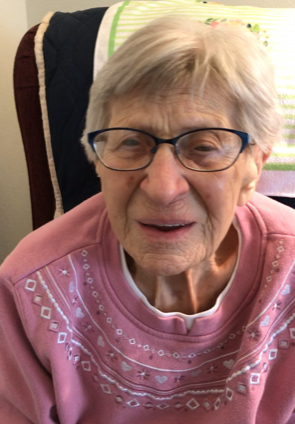 HALIFAX • Elsie Amelia (Magaro) Seagrist, went to be with the Lord Jan. 19, 2021. She was born July 25, 1923, in Halifax, Pa. She was the daughter of Michele Magaro and Mary (Buccieri) Magaro, both of whom were from the province of Calabria, Italy. In addition to her parents, she was preceded in death by her husband, Fredrick Daniel Seagrist; a son, Rudolph Michael; eight brothers and five sisters. Elsie grew up on her parents’ farm in the Halifax area, got married and lived on that farm for more than 90 years. In October of 2014, Elsie moved to Ecumenical Assisted Living in Harrisburg until being transferred to Premier at Perry Village Nursing Home, New Bloomfield, in 2018. She was a member of St. Bernadette’s Catholic Church in Duncannon and the Halifax Ladies VFW Auxiliary. She enjoyed baking, cooking and being with family, relatives and friends. Elsie welcomed her guests with these items no matter what time you came to visit. She also prepared items and meals for the neighbors and those not feeling well. She was always ready to do whatever she could for those that needed help. Surviving are a daughter, Anne (Sue) Seagrist; numerous nieces and nephews; two grandchildren; two great-grandchildren and two step-great-grandchildren. A Mass of Christian Burial will be celebrated in memory of Elsie at a later date due to the COVID pandemic. The service will be held at St. Bernard’s Catholic Church, 811 Shermans Valley Rd., Route 274 West), New Bloomfield PA 17068. Elsie had prearranged to donate her body to Humanity Gifts Registry for Research but due to her testing positive with the coronavirus, her body was rejected. She will be cremated by the Hetrick-Bitner Funeral Home, Harrisburg, Pa. Memorial donations may be made to St. Bernard’s Catholic Church. Father Robert Sharman was a very special person to Elsie. He was dedicated to visiting her both at Ecumenical Assisted Living and at Premier at Perry Village Nursing Home frequently. Paid by Sue Segrist