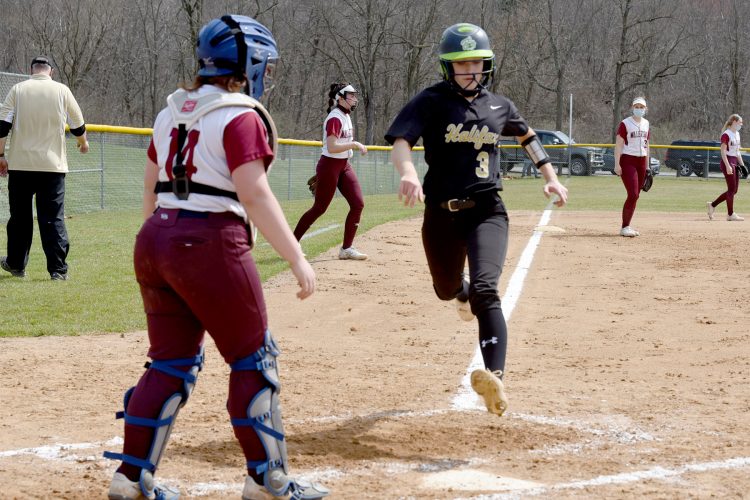 By Bill Lahr CONTRIBUTING WRITER MILLERSBURG • The host Lady Indians and Halifax locked horns in an early season showdown March 27. On a bright and sun-splashed afternoon, both teams sparkled between the lines, but at the end of the contest, Halifax left Wiconisco Creek Park with a 1-0 victory. “I was really pleased with our pitching and defense but not surprised since our entire team works very hard at practice,’’ said Mike Stiely, the Lady Wildcats’ first-year skipper. “Mackenzie Sawdey threw a complete game, two-hit shutout.” Early in the Game Paige Miller ripped the first pitch she saw for a solid single to center field. However, Indian pitcher Kierstyn Smith settled down to retire the Cats’ next three batters and give the Tribe its first at bat. Millersburg found it difficult to solve Sawdey, though, as she fanned two of three batters in the bottom of the first. Second Inning After the Cats’ led off with a fly out, Amyah Lebo worked a base on balls. A sacrifice 1-3 and subsequent wild pitch put Halifax in business with Lebo at third. As would be her calling card throughout the game, Smith worked a ground ball out 6-3 (Hannah Dyer to Sofia Miller) to finish off the inning and send the home team up for its second at bat. In the inning’s bottom half, Sawdey again fanned two of three batters and had another clean inning as the Indians struggled to put the ball in play. Decisive Inning The game turned in the top of the fourth when Alyza Steinhauer, the ’Cats’ leadoff batter and centerfielder, laced an 0-2 pitch down the right field line and scampered around the bases crossing the plate for an inside-the-park home run and a 1-0 Halifax lead. SEE SOFTBALL • PAGE B8