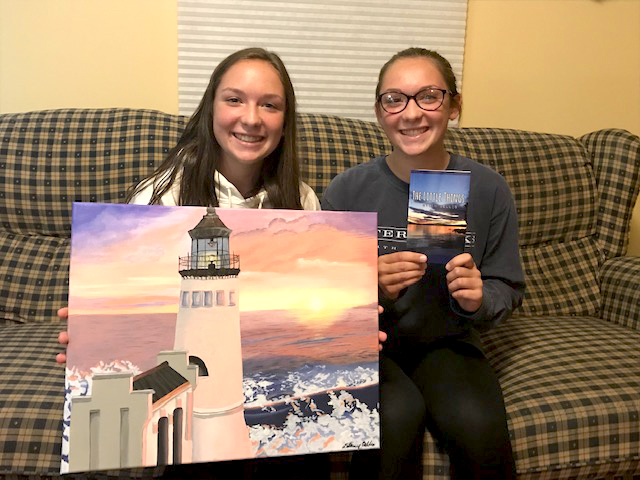 Story and Photos by Shirley Brosius.

The Bellis twins differ in tastes and temperaments.

Dylin is organized, a Type A personality; Delaney is laid back and goes with the flow.

“In a situation, she can be like really calm,” Dylin said, “And I’m the total opposite.”

The girls are the fraternal twin daughters of David and Trina Bellis; their paternal grandparents are Larry and Deanna Bellis of Millersburg.

Maternal grandparents are Geretta and Robert Shutt of Halifax.

The cover photo shows a sunset over a lake, and the book includes 38 short devotional readings and photos from a mission trip.

“I did all of the formatting,” Dylin said. “The (cover) picture is actually a picture we got when we went on vacation to Maine.”

She took about three months to write the book. Each page includes a title, a scripture verse citation, a short inspirational reading and a prayer.

“I just always liked to write,” Dylin said. “At night, I would just have these ideas and just write them. I accumulated so many that I thought I might as well just put them in a book.”

Since she herself tires reading long devotional articles, Dylin wrote the book to offer short, inspirational readings for people who don’t have time to read the Bible but want to.

Dylin initially ordered 50 books but has since placed two more orders of 50 each as she’s handed out books to friends and relatives.

She does not charge for the book, but accepts donations to cover shipping costs.

She’s already pondering another writing project that she hopes to finish before Christmas, this one titled ‘‘The Greatest Journey.’’

Dylin hopes her writing will spur people on in their spiritual walks.

Delaney, on the other hand, loves to paint.

“These are my two latest,” she said, pointing to paintings of a lighthouse and a Santa Claus.

Artistic talent runs in both the Bellis and Shutt families, and according to the twins’ mother, Trina Bellis, Delaney drew illustrations from VHS tape boxes from the time she was a child.

“I don’t take any art classes,” Delaney said. “I don’t plan on making it a career. It’s a hobby. I do it on my own time for fun. Or for people. I have a list of people who want paintings.”

Besides artistic talent, the Bellis twins do well in academics. Both earned distinguished honors last year, with 97-98 being their lowest grades.

Dylin enjoys writing, reading, analyzing and critiquing written material and plans to attend a four-year college to major in English.

“I was recently looking at Susquehanna University in Selinsgrove, and they have an English major that is in publishing and editing, which is what I want to do,” she said.

“But I’m undecided,” she noted.

‘They are a blessing’

Spicher has known the girls since birth.

“They are a blessing,” she said. “They are talented and a true example of a follower of Christ.’’

Spicher, who herself published a book, encouraged Dylin to explore getting the book into print.

“She had such a passion for writing and editing, and she had such a gift because she had an amazing attention to detail.”

A mission trip to Maryland, where their youth group performed community service, has had a major impact on the twins’ lives.

“My group went to Habitat for Humanity ReStore,” Delaney said. “We helped organize the whole place, clean up. People donate their old furniture (to be resold).”

According to Spicher, the mission trip took the youth outside of their comfort zone.

“It just showed them what they’re made of,” Spicher said. “You saw the Holy Spirit was moving through all the youth.”

Before that trip, the twins’ favorite music was country, but now they crank up the volume and sing along with Christian music artist Micah Tyler.

That trip also inspired the Bellis twins to take on a mission project of their own.

With two other youth group members, they are planning a dance for which girls will wear previously worn homecoming dresses, then donate them to a consignment shop.

Spicher has been excited to see the youth grow in their self-confidence and their organizational skills through the project.

“It’s going to be a great example of their kind hearts,” she said.

“It’s a huge opportunity for the community and for the youth to grow through the project – both spiritually and in their leadership abilities.”

She expects the Bellis girls in the future to do great things for the Kingdom of God, for the community and for their family.

“They have many talents and gifts,” Spicher said.

“I really like going to youth group,” Delaney said. “That’s one of my favorite things. I miss when I can’t go. Just the family atmosphere. You can be yourself, and no one’s judging you.”

The girls credit their grandmother, Deanna Bellis, whom they call “Mimi,” for having a positive impact on their lives as she babysat for them.

“She would read to us, and you couldn’t get away with much,” Delaney said. “She formed our beliefs.”

“We prayed before every meal,” Dylin noted. “There was no saying bad words. There was no fighting.”

They also credit that grandmother for making “the best butter toast ever.”

“And (her) peanut butter toast is even better,” Dylin added.

The twins say they’re starting to look more alike, now that both wear glasses and wear their hair long.

Dylin has been more independent.

“I depend on her,” Delaney commented. “We need to go to the same college, because I won’t know how to take care of myself. She’s like my second mom.”

Delaney had recently forgotten to bring a ponytail holder to soccer practice, so Dylin supplied one.

“You usually bring your algebra book home, and I forget,” Delaney said to Dylin.

Sometimes they will fight.

Once when Delaney had not packed enough food for lunch, she kept asking Dylin for some of hers.

“She yelled at me because she got mad,” Delaney said. “But she had extra she wasn’t going to eat.”

“It bothered me that she didn’t pack her own snacks,” Dylin said. “It just rubbed me the wrong way.”

But their fights are short-lived. They can look at each other across a classroom, know what the other is thinking and laugh.

‘It’s been a fun journey so far’

“It’s been a fun journey so far to watch them grow up,” said their father, David. “As close as they are, you can see they’re independent human beings.”

According to Trina, the first year was the hardest, juggling nighttime feedings and diaper changes.

Then, Dylin would not let her mother out of sight. But once they began walking and talking, the twins entertained each other.

“They would tell each other what to say,” Trina said. “It was fun watching them interact.

‘‘You could see the difference (between them) in preschool. Delaney would make friends easily, while Dylin kept to herself.”

The twins say the best thing about their relationship is that they’re never alone.

“I tell Delaney things before I even tell my mom,” Dylin said.

If one has a sleepover away from home, they miss each other and do Facetime on their phones.

The twins have been very helpful and supportive to their 11-year-old brother, Colt, who has a peanut allergy, Trina noted.

“It’s amazing to see. They will fight with him like siblings do; however, when we are out somewhere … they become mother hens,” she said. “They do take care of him.”

Spicher encourages the Bellis twins to continue to follow their passions.

“They’re great the way they are,” she said.

“If they continue to listen to the Holy Spirit and follow His direction, I think they’re going to

Pictured above: Delaney and Dylin Bellis.