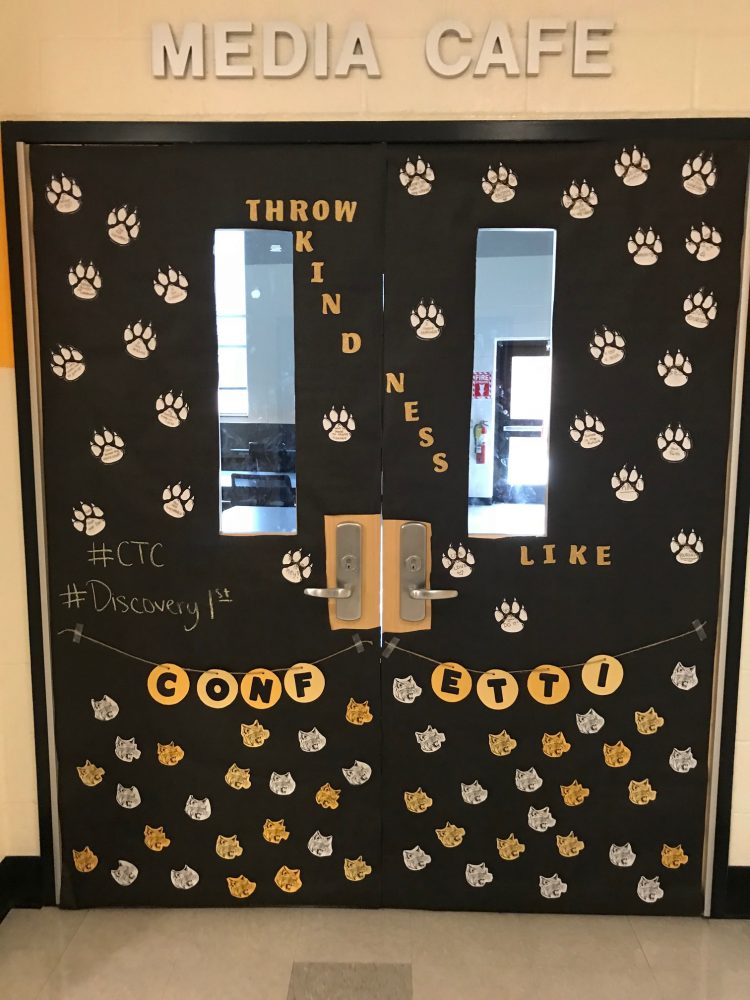 ‘‘Brighten the corner where you are,’’ say the lyrics of a well-known 20th century hymn.

Students at Halifax Area High School have been doing a lot of ‘‘brightening’’ so far this school year.

They’ve been doing it not in corners, but on classroom doors.

Student members of the high school’s CTC (Communities That Care) Club – an arm of Halifax CTC –  have taken on the task of decorating doors in colorful motifs, with inspirational messages prominent within the designs.

This is not for a contest, and no ‘‘best door’’ prize is at stake.

In fact, the only reward the students want to earn is twofold: seeing their classmates and teachers react favorably to the doors; and being a part of something that spreads good cheer throughout the school.

‘‘I have heard a lot of comments about how positive this is for our school,’’ said Kaitlyn Lebo, a CTC participant.

‘‘I know I personally love going around the hallways and seeing how awesome they look,’’ student Maddie Singer stated.

‘‘Other students are stopping to look at the doors, so I am sure it’s brightening their day.’’

And that’s the whole point, according to Heather Crook, Halifax CTC community mobilizer.

‘The biggest thing is that you are walking into a room where you see positive messages in front of you – ‘You’re awesome’ ‘Be your own superhero’ ‘It’s OK to be you.’ ‘You can do anything.’

‘‘Having that encouragement as a reminder to students can be very important for them.’’

The door-decorating initiative grew out of a campaign done in Franklin County’s Chambersburg Area School District.

The month-long endeavor encouraged the district’s students to ‘‘Be Kind’’ in both word and deed.

‘‘I thought it would be a great idea to bring back to Halifax,’’ said Crook.

‘‘It’s so easy to get into negativity in our community – what’s going wrong, instead of focusing on doing what’s right.’’

He had told Crook that ‘‘Kindness’’ is one of the themes this year for thought and study among students in the district-wide Discovery initiative.

Under the banner of ‘‘Spread Kindness Like Confetti’’ – which was the original theme used in the first several door decorations – Halifax’s student-level CTC clubs already have been busy.

They intend to spend the remaining 2018-19 school year decorating doors by request; once the high school is completed, it’s on to the middle school, then the elementary.

‘‘It started with one door – my office,’’ Crook noted. ‘‘We decided to ask a few teachers to see if they were interested.’’

‘‘From there, it went to teachers asking, ‘When can I get MY door done? Then it turned into ‘Can you personalize my door?’

‘‘It’s really turned into a huge thing. We started with two to four, and so far we’ve done more than 20 already.’’

Spinning off from the original design, doors have been decorated in motifs ranging from Penn State to Notre Dame to Doctor Who to Americana.

‘‘The teachers are so excited to get their doors done because the themes are so personalized,’’ Crook stated.

‘‘They feel appreciated because the students are taking time to make their doors look special.’’

‘‘It was exciting when (teachers) saw the first one, and  word started getting around – ‘What’s this? Can we have that?’ It’s a great reminder of how important kindness is,’’ said the teacher, whose own door carries a PSU theme.

‘‘They’re not just brightening the halls with color, but the messages have been incredible,’’ she said.

No matter the theme, each door includes the same message: ‘‘Spread Kindness Like Confetti.’’

It appears that students who see the words are starting to heed them, according to Crook.

A ‘change in atmosphere’

‘‘I feel the atmosphere in the high school is already starting to change, and we haven’t yet gone to the elementary or middle school.’’

Among other things, she said she has seen students make time to ensure no one eats in the cafeteria alone at lunch time.

And as both Lebo and Crook noted, the colorful entries also can help make the campus more friendly and welcoming to visitors from outside the school or community.

‘‘Especially in a typical high school environment, where there’s lots of drama and lots of problems, (the doors are) there to basically remind people that kindness is the way to go.

‘‘It brightens up people’s day when they see it, and you can tell the overall feeling of the school has just changed so much since the time we started doing it,’’ she said.

According to Crook, Chambersburg district officials said its own kindness endeavor ‘‘changed the whole community atmosphere,’’ and she’s confident the door decoration project also can have far-reaching effects.

Piggybacking on the door decorating, CTC planned to start a ‘‘kindness initiative’’ on campus in which students will be encouraged to write down on paper how they plan to put kindness into practice.

‘‘We are going to take pictures of them to encourage other people to show kindness in different ways,’’ Crook noted.

The CTC Club also put together a float with the same theme and invited teachers, administrators and school board members to ride along with them during the Halifax community Halloween parade Oct. 24.

The float also was on display at Halifax’s Trunk or Treat program last week.

In addition, CTC is making T-shirts stating simply, ‘‘Be Kind,’’ to individuals and businesses in the community.

It’s the students in the club who are doing the hard work and making the doors what they are, according to Crook and Braxton Cooper, a CTC advisory board member.

‘‘I’ve spent a couple evenings helping, and (students) are definitely putting in the bulk of the creativity  and the work,’’ Cooper noted.

‘‘These students are here for countless hours,’’ Crook commented. ‘‘They don’t have to do it, but they choose to do it because they want to brighten up their school.

‘‘We’ve been here every night of the week, sometimes Saturdays and Sundays,’’ she added. ‘‘Teachers  and even past CTC members have come in to help.’’

Students taking the lead on the project fulfills a key part of Halifax CTC’s business model, Cooper noted; that is, mentoring young people to be leaders in their school and, eventually, in their communities.

Whatever challenges are present, Lebo is one student who sees a big payoff.

‘‘When we get one done, it’s a relief,’’ she said. ‘‘But at the same time I feel really good, because I know someone else could see one more door with positive messages to help them through their day.’’

‘No one has been bothering them’

Enthusiasm for the club’s activities also is high among the Halifax administration.

‘‘Our CTC Club has really taken the school by storm this year,’’ noted John Osuch, the high school principal.

‘‘Student participation is the highest I’ve seen since I’ve been at the school, and the ideas they have for helping others and for influencing the school climate are amazing.

‘‘The door decorating initiative has brightened the school and is a large part of what has gotten this school year off to such a great start.’’

‘‘Heather and the CTC Club are doing wonderful things in our school and in our community,’’ said David Hatfield, Halifax district superintendent.

‘‘The doors and the kindness initiative are really just the visible tip of the iceberg – there is so much going on underneath the surface to make our school a better place for our students.

‘‘CTC’s initiative this year really compliments our Discovery Character Development Program,’’ Hatfield said. ‘‘I am so proud of the work that they are doing.’’

Aunkst also has found proof that the doors’ messages have taken hold.

‘‘No one has been bothering them, so that means it’s making an impact on everyone.’’

Pictured above: Positive messages greet the students when walking into a room.