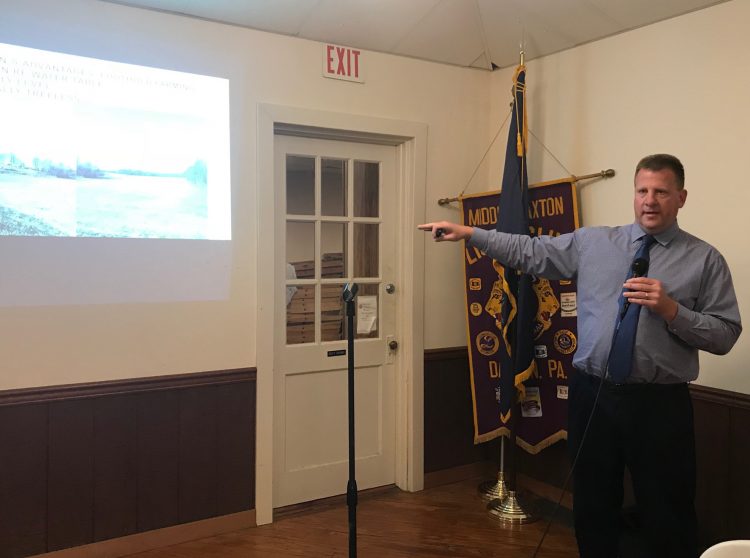 Craig Henninger is fascinated by local history and enjoys presenting it to students of all age.

He recently spoke to the Dauphin-Middle Paxton Historical Society  on the topic, “Lykens Valley Massacre: A Local Skirmish in a World War.”

Henninger teaches U.S. history in the Upper Dauphin Area School District. He also is a member of the Elizabethville Area Historical Society and presents talks to it.

Regarding his recent presentation, Henninger said, “I want to give due credit to John Sultzbaugh, who presented the original story.’’  The following is based on a discussion with Henninger prior to his recent talk.

For a few short years in the 1750s, the area we call Pennsylvania was center stage for events that led to the Seven Years’ War (usually called the French and Indian War in the United States.)

Consequences of those events led to the local event commonly known as the Lykens Valley Massacre.

A full explanation of the massacre also sheds light on the history of the relationship between the Indians and “English” (European) settlers when upper Dauphin County was still part of the frontier.

As part of the frontier, Lykens Valley was a heavily wooded area in the western part of Lancaster County.  (Dauphin County was not created from Lancaster until March 4, 1785. The first settler, Andrew Lykens, moved into the valley in 1750.

Andrew Lykens (also spelled as Lycans or Lycons) was born in 1701 in Philadelphia.  He and his wife, Jane, had a son, John, and five daughters. While still a young man, Lykens moved his family to the frontier, settling on the west side of the Susquehanna River between the Juniata River and Sherman’s Creek near present-day Duncannon.

This land had not been purchased from the Indians, so the governor declared them to be squatters and ordered them to get out of the area.

Lykens resisted the order, threatening the sheriff with a loaded gun.  The sheriff, though, managed to disarm Lykens, who was then arrested and sent to jail.

At the insistence of local Indians, the cabin was burned.  Witnesses to the events claimed this incident became the foundation for hostile feelings between Lykens and  the local Indian inhabitants.

Around 1750, when he was released from jail, Lykens, his wife and son settled east of the Susquehanna, on a tract of about 200 acres on the north side of the “Whisconesong Creek” (aka Wiconisco or “Wikenniskeu.”)

The family cleared some land, made improvements on it and built a cabin.  This location is close to the present Loyalton Recreational Park.

Other settlers moved into the area, including a John Rewalt (aka Renault or Renwalt) and a Ludwig Shott (aka Shutt).

In 1756, the peace of the valley was shattered by events which originated elsewhere.

For many years, the Pennsylvania government had a good working relationship with the Iroquois Indian nation. The Iroquois, in turn, dominated the Delaware Indian tribes, which inhabited Lykens Valley.

Tensions arose, however, in 1737 as a result of the “Walking Purchase” the government made with the Indians. The agreement was that William Penn’s sons would buy all the land westward as far as a man could walk in one and a half days. The government used trained runners and managed to cover 70 miles, instead of the 40 miles the Indians had expected.  In all, the purchase added more than 1.2 million acres to land open for settlement.

Meanwhile, events between England and France erupted when a Virginian named George Washington led a party into the area that is now Pittsburgh. When his party was repulsed by the French and their Indian allies, England sent an army under the command of General Edward Braddock to secure the area.

In 1755, in the Battle of the Monongahela, Braddock was defeated by the French forces and retreated east.  Soon after this, the two world powers declared war on one another.

With Braddock’s defeat, it looked like the British and their Iroquois allies might lose the battle for North America.

Hoping to get revenge, the Delaware  sided with the French, which was a direct threat to the European settlers in Lykens Valley. Outside the region, the Delaware and Shawnee destroyed many English farms, reclaiming ancestral lands for themselves.

In March 1756,  three Delaware braves – Bill Davis, Tom Hickman and Tom Hayes – persuaded 11 other braves to join them in attacking the settlers.

Shortly after sunrise March 7,  the party attacked Lykens’ farm. He and Rewalt had gone out to feed their animals when they were fired upon. No one was hit, so they took cover in the hog pen. Shott and a (unnamed) black settler joined the fray.

In the fight, Lykens killed Davis, and Shott killed Hickman and Hayes. Both men were wounded.

The English settlers retreated south over the mountains, while the Indians retrieved their casualties.

The settlers found safety east of Fort Hunter, (close to present day Colonial Park Mall) with its larger population, including Conrad Weiser, an Indian agent and friend of the Iroquois.

While there,  Lykens died from his wounds. The attack caused all the settlers except one, to leave Lykens Valley for several years.

In 1763, the Treaty of Paris ended the French and Indian War, and the threat of Indian attacks subsided. The March 1756 incident remained the only known attack by Indians on settlers in this region.

Settlers eventually moved back, including Jane Lykens and her children. In 1765 she was granted a patent on the land her husband had first settled. The cabin Lykens built stood until about 1863, and his land is now split between a privately owned farm and the Loyalton sewer system.

The Lykens Valley Massacre is a clear example of how larger, even world, events can influence local happenings. The French and Indian War was just one of a series of wars between Britain and France.

Braddock’s defeat happened far from the valley. The Walking Purchase was just one more example of “land lust” that led to much injustice on the frontier. Yet these events all conspired to lead to Lykens’ death.

Henninger points out the changing of Andrew Lykens surname from Lycans to Lykens might have occurred to protect the dignity of the name.

“Lycan,” in European folklore, was a werewolf-like creature, not exactly something worthy of a town being named after it.