All Hands On Art 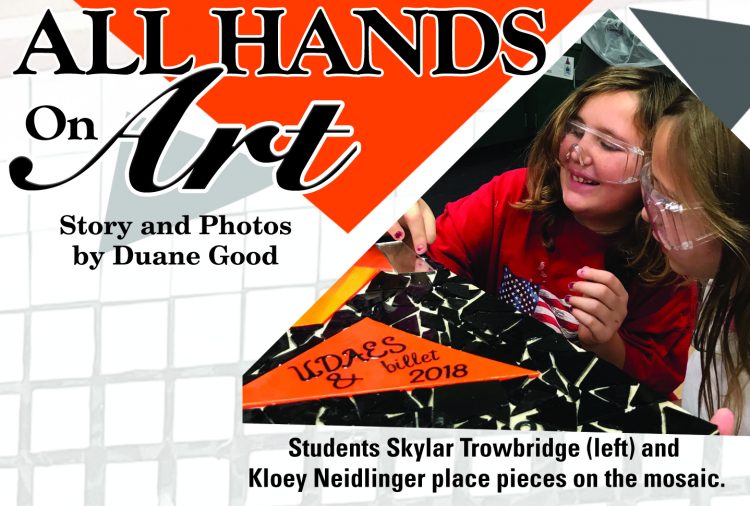 Years from now, anyone who’s currently a student at Upper Dauphin Area Elementary School can enter the lobby, point to a wall and say, ‘’I helped to create that.’’

Each and every student had some part in working on the 5 x 9-foot mosaic that greets students and visitors alike to the facility.

Late last year, boys and girls in kindergarten through fourth grade placed glass pieces – colored in either orange, black or white, the school’s colors– on one of three separate cement board panels, which then were joined together to form the final piece.

They worked under the guidance of Linda Billet, a Hummelstown-based artist, who has created several other mosaics in schools and public places.

Billet’s 10-day residency was funded 50 percent by the Pennsylvania Council of the Arts. The other half was funded by elementary art teacher Sara Jarrett through the Square 1 Art Fundraiser held at the school last fall.

‘The kids designed it’

A previous Artist in Residence program, in which students also participated, resulted in the sculptures now found in the school courtyard.

‘’I always wanted to do a mosaic,’’ Jarrett noted. ‘‘It’s something I don’t have a lot of experience in personally, and it was also something that the kids could participate in hands on.

‘‘Originally, I thought we were limited in time and in the number of students who could participate,’’ she added. ‘‘At our initial meeting with Linda, she asked if she could come the entire day, and I asked if the entire school could participate. She said yes. I was thrilled about that, for the kids.’’

‘‘I came in with sheets of glass of one square foot apiece,’’ she explained.

‘‘We put down the orange pieces first, then white, and black went on last. To fill in between the spaces, we used black grout, like is used on a tile floor.’’

“The kids actually designed it,’’ said Billet. ‘’We would cut out the orange pieces, and they would place it, and they asked, ‘Do we need it higher here, or lower here?’’

Read more on page A10