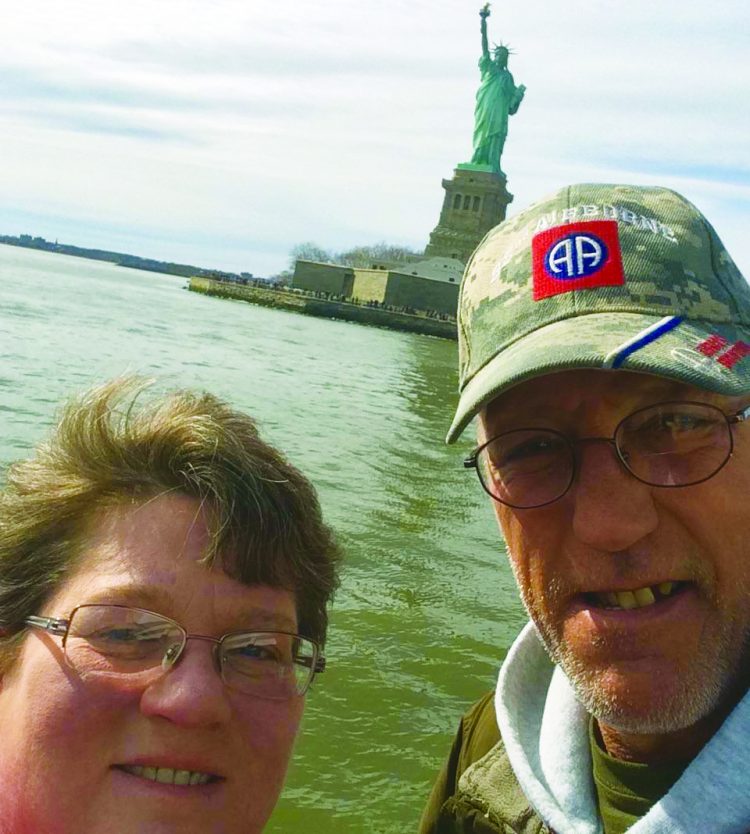 Visiting the Statue of Liberty, Liberty Island and Ground Zero at the site of the 9/11 attacks in New York City topped the to-do list for U.S. Army Gulf War veteran Timothy Schell, who has metastatic lung cancer, stage IV.

Schell, a Legionnaire at Post 404 in Elizabethville, Pa., mentioned his wish while chatting at the post’s canteen. An American Legion Auxiliary Unit 404 turned that dream into a reality, surprising Schell and his wife Tina (a Unit 404 member) with a day trip to see those sights.

The unit paid for the Schells’ transportation, food, and tours, and rented a van for the trip.

Even with Elizabethville being less than 200 miles from New York City, Unit 404 Secretary/Treasurer Geraldine Deppen said the auxiliary members knew the trip would be financially out of reach for the Schells.

“He didn’t ask us to do this for him; we chose to do this. We were so excited for him to be able to go there and fulfill his dream. We wanted to take care of him because he helped take care of our country.”

Schell, who served as part of the Army’s 82nd Airborne Division, and later in the National Guard from 1983 to 2003, explained why he wanted to see these particular sights.

“I felt it was my duty to go up and pay homage and visit Ground Zero. To visit and see the memorial, I was very moved. To run my hands across the marble with the names etched into it — it connected me to them.

‘‘My [military] unit during its last deployment lost a few people, so I understand about loss,” Schell added.

As for seeing the Statue of Liberty, Schell said he was in awe because he had never been that close to the iconic landmark.

“It still means something to me. The statue, and all that she stands for, is special.”

While in New York City, Schell found a way to pay forward the generosity he was shown. He willingly gave the last bit of cash in his pocket, about $20, to a person he felt needed the money more than he did at that time.

Schell said he struck up a conversation with the person, a man holding a cardboard sign that stated he was a homeless veteran. Schell saw the man while in the city’s subway system.

Based on their conversation, Schell said he was convinced the man indeed was a military veteran, and Schell gave him the money.

“A combat veteran being homeless — that just doesn’t jive with me. He was getting ready to lie down for the night, right there on the ground in the subway area. That’s just not right,” Schell said.

Pictured above: Tim and Tina Schell take a ‘‘selfie’’ while in New York City, with the Statue of Liberty in the background.