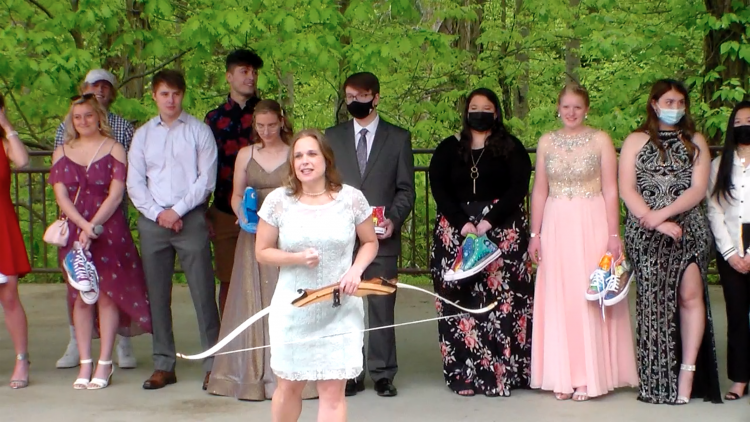 By Duane Good EDITOR In the end, the community’s enthusiasm matched that of the participants. More than 30 Upper Dauphin Area High School students brought their art and writing talents to bear in ‘‘Step Up,” an initiative to raise funds for the Lykens Valley Children’s Museum. The results of their work – essays accompanied by sneakers painted in the style of famous artists – were on display earlier this spring in numerous area businesses and other venues. The project’s concluding segment, a public auction of the student sneaker art, was held in mid-May at the Ned Smith Center for Nature and Art. Proceeds from the auction, accompanied by additional donations, resulted in a total of $10,575 for the museum – a number that far exceeded anyone’s expectations. ‘‘This is a crazy amount,’’ said an ecstatic Lisa Ditty, the LVCM’s director, who would have considered a third of that to be a success. ‘‘It’s higher than we’ve ever received at one time, including grants,’’ she added. ‘‘We had been hoping to raise $15,000 over the next few years. Right now we are just a little shy of $5,000 toward that goal already.’’ The money raised will go toward SEE MAGICAL • PAGE A2

Emily Nell, the Upper Dauphin Area High School art teacher who coordinated the ‘‘Step Up’’ initiative, praises the contributing students (some of whom are not pictured) and encourages the audience to bid strongly on the students’ sneaker artwork. (Video image captures)