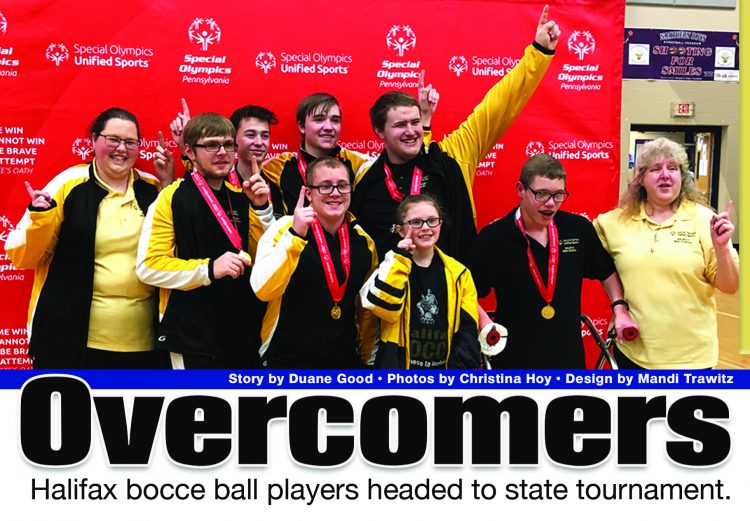 The road to a team championship wasn’t a smooth one for Halifax Area High School’s unified indoor bocce team.

This week, however, the Wildcats can describe themselves in two words – Gold Medalists.

Halifax has earned its first-ever title in four seasons of competing in the Greater Harrisburg Regional IUS indoor bocce tournament. The victory earns the six-member squad a berth in the state event, scheduled for Wednesday and Thursday, March 18-19, at Giant Center, Hershey.

Held Feb. 25 at Dillsburg’s Northern York High School, the tournament drew 11 teams from throughout south-central Pennsylvania. Halifax and UDA are the only two Sentinel-area schools with teams.

‘We had a lot of obstacles’

IUS indoor bocce remains unique among school sports in that on each team of up to eight member, half are Life Skills students (known as ‘’Athletes’’) and half are general-education students, (known as “Partners’’).

IUS (Interscholastic Unified Sports) is a joint venture between Special Olympics and the PIAA (Pennsylvania Interscholastic Athletic Association). Halifax’s previous best finish was second in its initial competition season. From its inception, the program has been coached by Christine Miller, assisted by Jennifer Gutierrez.

‘‘Our Halifax Unified Bocce team has done a very good job undertaking new tasks and rules and achieving their goals as a team. We are very proud of the leadership they have developed and displayed as a team this year,’’ Miller stated.

‘‘We had a lot of obstacles to face and they became overcomers. One of our team members had to learn to use a ramp to assist him in being able to play on our team. This provided a lot of challenges to him and the team and made them work harder together to help their teammate succeed.

‘‘It is a real pleasure for Coach Jenn and I to be part of such a great team. We have three seniors who are great role models for our new freshmen,’’ Miller added.

‘‘We are sad to be losing a large part of our team this year as they will be graduating and moving on to start their futures in the working world.

Halifax wishes them well in their endeavors. Halifax plays its first state-level game in Hershey at 5 p.m. March 18 and the team hopes to see many people on hand to cheer them, the coach stated.

Bocce (pronounced botch-ee) is the third most popular participation sport in the world. The version most commonly played today comes from Italy, although the roots of the sport can be traced to the Roman Empire. Bocce • PAGE A2