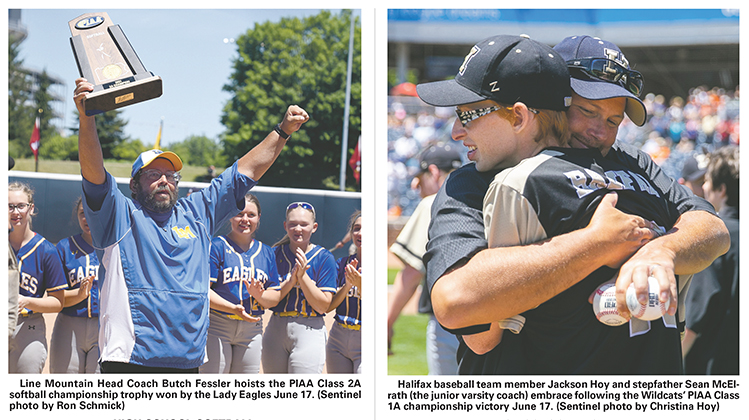 Line Mountain’s softball team capped the program’s most successful season in history, with its first-ever state championship June 17. The thrilling 1-0 extra-inning triumph over Ligonier Valley earned the Lady Eagles the Class 2A trophy and gold medals. It was a quiet but gut-wrenching game that went down to the wire. In the bottom of the ninth and with one out, Aspen Walker singled to left field. Then with a 0-2 count, Kaely Walshaw hit a shot to left center on an outside pitch, sending home courtesy runner Brooke Barwick with the winning run. The win fulfilled an objective set by the team from the season’s outset – repeating as District 4 champions and running the table at states. ‘‘I am glad this was a goal and not just a dream,’’ said Butch Fessler, the Eagles’ head coach. Early Innings When the softball team members woke up last Thursday morning, excitement was mounting as they made their final trek as one group to Beard Field on the campus of Pennsylvania State University. Eagle fans cheered their early bus departure and sent an extra surge of adrenaline among the girls. The title game was the final start on the circle for Kya Matter, the senior hurler who once again put together a brilliant performance using her fastball cutter to carve out strikeouts as she helped to close the books on LM’s run to states. The contest was a pitching battle between Matter and Ligonier’s Maddie Griffin. Players on both sides found bats silent as the reputation of both pitchers was evident in the fact that not much offense was generated throughout all nine innings. Griffin came into the game with 299 strikeouts and 39 walks for the season while allowing only 22 hits from opponents. Matter had posted 238 strikeouts and eight walks. Both pitchers refused to break their composure, and as a result, the game was a consistent theme of 0-2 counts followed by strikeouts. “The coaching staff thought we could hit Griffin; I guess we underestimated her,’’ said Fessler. ‘‘We knew what Kya was capable of, keeping us in the game. “We really stressed the fact that (the players) should enjoy the journey. “A lot of things happened off the field in the postseason that none of us will ever forget. “We also stressed to them to trust their instincts and what we worked on all year. Everybody did that, and it turned out pretty good.’’ The game’s first hit saw the Rams’ Jordan Hofecker single to right with two outs in the top of the second inning. But Matter fanned the final batter to stop any threat. In the bottom of the third, Matter, on a full count, ripped a line drive to right for a single with two outs. Matter then stole to second, putting her in LADY EAGLES • PAGE A2

By Gerald Kolva CONTRIBUTING WRITER “We bring a lot of young talent and good chemistry into 2021,” Head Coach Jacob Sprengle said of his Halifax baseball team in early March. “I think this season will lay a foundation for the next few years.” Not only is the foundation set, so is the bar. And it is very high. Ryan “Rhino” Stahl, Jackson Hoy, Benjamin Cross and Carson Buffington walked off the diamond for the final time June 17 but for the first time with state gold around their necks, after defeating Eden Christian Academy, 9-1. “This senior class will be greatly missed,” Sprengle acknowledged. “Their experience kept us calm at all times. The emotions of not having them next year are too great to express right now.” After winning the first four games of the season, Sprengle’s Wildcats did not win consecutive games again until their final four. That proved to be enough to punch the team’s ticket to Pennsylvania State University’s Medlar Field for the championship round. Eli Tyrell breezed through the Warrior lineup, striking out four, surrendering seven hits and giving up a single run. He finishes his junior campaign at 5-1, with an ERA of 1.31. Breaking It Open Early Halifax scored three times in the first and had an 8-1 lead after two frames. “We were fortunate to break things open early and work with that lead,’’ said Sprengle. ‘‘It took some pressure off everyone and let them play relaxed.” Stahl had two hits and scored both times he got on. Buffington was two-for-four with four RBIs. Judah Miller was three-for-three, drove in two runs and scored thrice. The four teams Halifax defeated throughout the state tournament had a combined record of 68-20. The Wildcats outscored them, 27-6. “Our defense showed grit all postseason long to keep us in games,” Sprengle commented. “They matured as a group to play a high level of pitch and catch the last several weeks. It was a huge difference-maker for us.” Look for big things from this group next year. Tyrell and Brody Stoneroad will be seniors. Miller, Trent Strohecker, Briar Campbell and Kaden Berry will be juniors. Isaac Miller will be a sophomore. “I am beyond proud of these boys and this community in what they accomplished,” Sprengle added. SEMIFINAL ROUND Halifax 4, Juniata Valley 3, June 15. Halifax, behind Judah Miller’s third straight complete game and Tyrell’s two-run double, advanced to the Class 1A state championship game by defeating Juniata Valley a day after being rained out. Buffington was three-for-four, with an RBI and run scored. Stahl had a pair of hits and drew two walks. WILDCATS • PAGE A2